The results of the UK's fastest selling used car of 2018 are in, some you might have half expected and others which coming as a surprise.

These figures come from Indicata, the used vehicle management portal from Autorola UK, and take into account 1.1 million cars sold by dealers during 2018 that were between six and 36 months’ old.

What Is The UK's Fastest Selling Used Car?

One of the least shocking results is that the Ford Ka was the UK's fastest-selling used car in 2018, taking on average 32 days to leave forecourts. So if you're selling a car don't panic after the first week of advertising and there are no calls, it's likely to take a little bit longer to sell. It's reassuring to know that, provided it's clean, tidy, legal and priced in line with similar models, you’ll be fine.

Car Selling: What's My Car Worth?

Then again, if you own a less popular model, be prepared for a longer wait. If you are trying to sell Subaru’s Outback, Forester and XV, they took a massive 103, 105 and 107 days respectively to sell. Yes it could take over three months to shift a Subaru, worth remembering if you're looking to buy one.

Car Buying: How To Check A Used Car 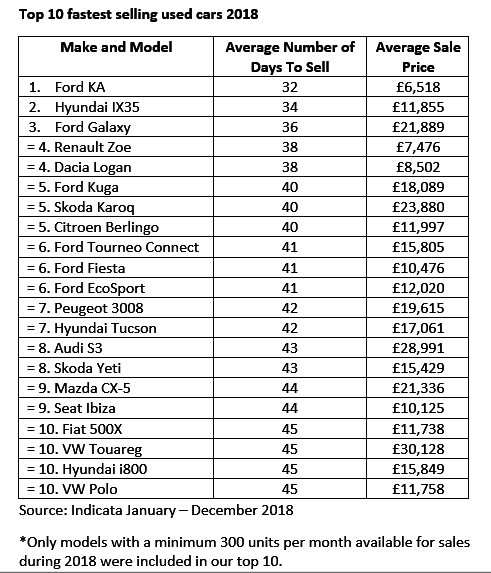 After the Ka, comes the Hyundai ix35 at 34 days, here's the evidence that goes some way to proving that Korean cars are becoming the bread and butter of family cars.

However, Ford still makes up the bulk of used car sales with a very solid performance in these stats. They had six models in the top 10, so as well as the chart topping Ka, there's the Galaxy the UK’s best selling people carrier, in at third, then the fashionable sport utility vehicle known as the Kuga, which is fifth. It didn’t stop there as the even the bulky seven seat, van related Tourneo Connect was equal sixth, along with our favourite shopping hatch the Fiesta and more SUV goodness in the shape of the EcoSport.

Perhaps the most interesting aspect of these fast sellers is that the pure electric Renault Zoe, which made the top 10 in joint fourth place, is on average selling in just 38 days. Used car buyers really are starting to turn to electric vehicles or EVs as they start to come down in price.

A need-to-know for Electric Car enthusiasts

What can we take away from all this? We recommend buying a Ford if you want to sell it quickly, or a sensible Hyundai and that yes small, good value EVs like the Zoe are growing in popularity.

When buying a used car it's important that you understand the pros and cons of the different used car sellers. It also pays to undertake these 11 used cars checks you can do without getting your hands dirty.

How To Reject A Faulty New Car

Car Buying: How to Buy a New Car for Less

Car Buying Guides: How to Finance Your New Car